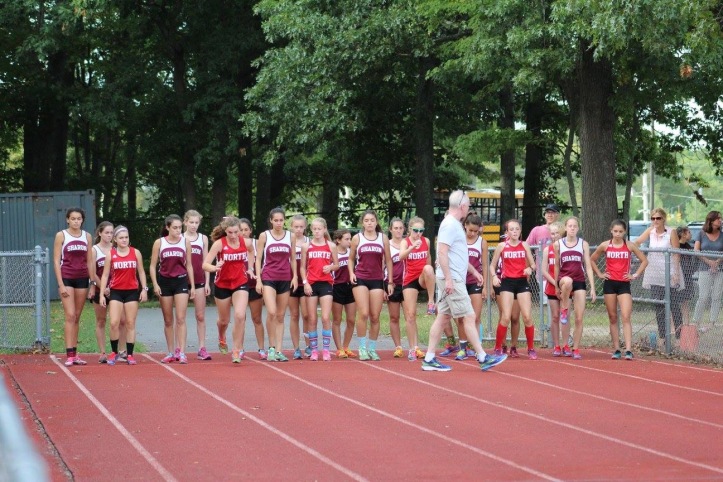 On Tuesday, September 24th, after weeks of preparation and researching athletes and times, the North Attleboro Cross Country team was faced with their most pivotal meet of the season. Taking place on a beautiful day at their home course, the team prepared to run against the Sharon Eagles.

For both the boys’ and girls’ teams, it was intended to be a close meet. Wins or losses could be determined by any small infraction. Considering the fact that North Attleboro had recently switched to the Davenport division of the Hockomock League, the team knew that Sharon would be the only challenging meet and a win would be a make-or-break in order to win the Hockomock title.

As far as the boys’ team goes, captain Matt Reimels was “a little worried” but “had faith in the younger members of the team.”

Senior Matt Reimels and sophomore Liam Monahan claimed second and third place, with Julian Dixon not far behind at fifth place. This, yet again, resulted in enough points to win the meet, motivating the entire team enough to cheer on the girls team through a victory.

In regards to the race, senior captain Emily Fernandes said, “I was nervous at the start of the race, but as we ran along and I saw my teammates and I passing maroon jerseys, I felt more confident that we would win.”

It was still too early to determine who would win this meet, even as the runners were crossing the finish line at the end of the race. Afterwards, when informed of the win by her coach, Forbes claimed she “actually shed a tear,” and it wasn’t “just sweat” in her eyes.

Senior runner Rene Gagne remarked, “It was a lot of pressure, but it was a good team effort and I’m glad we came out with the win.”

With this victory under their belt, the North Attleboro Cross Country team will proceed to their last two dual meets and have a lead when it comes to Hockomock Championships.  The team competed in varsity, junior varsity and freshman races at the Ocean State XC Invitational this past Saturday. For both boys and girls teams, their current record is 3-0.